The organization of Miss Supranational is delighted to inform  that Miss Supranational 2017 will be taking place in two countries, Poland and the Slovak Republic will again share the honor of hosting this year’s internationally televised pageant.

Miss Supranational 2017 finals will take place on December 1st 2017 in the spa resort city of Krynica Zdroj, Poland. The reigning Miss Supranational, Srinidhi Shetty of India, will crown the 9th titleholder of Miss Supranational in a thrilling televised production full of glamour, fashion and entertainment, of the world’s most spectacular pageant.

Contestants will arrive in Poland from where they will travel to the picturesque Slovak city of Poprad, located in the foothills of the High Tatra Mountains, here they will be stay at the amazing waterpark and spa of Aquacity Poprad, whose waters are drawn from natural geothermal underground lakes. The preliminary competitions will be held in this beautiful holiday resort. For the live final itself, the contestants will travel to Krynica – Zdrój in Poland, which has the privilege of hosting the Grand Slam and Big5 pageant on 1 December 2017.

„We are delighted Miss Supranational will be travelling again to two countries, who will share the opportunity of providing the pageant’s location this year. With the fantastic infrastructure and security both locations off, we would like to thank the cities of Krynica – Zdrój and Poprad as well as the resort of Aquacity Poprad who will welcome our contestants. Miss Supranational has again seen tremendous growth in the last year with our wonderful Miss Supranational, Srinidhi Shetty, visiting so many countries and events around the world, and a truly spectacular show is being planned for 2017” – commented Gerhard Parzutka von Lipinski, President of Nowa Scena sp. z o.o.

We look forward to welcoming everyone to the spectacular Miss Supranational pageant televised live from Poland .

Join us live on 1 December 2017 in Krynica-Zdrój, Poland. 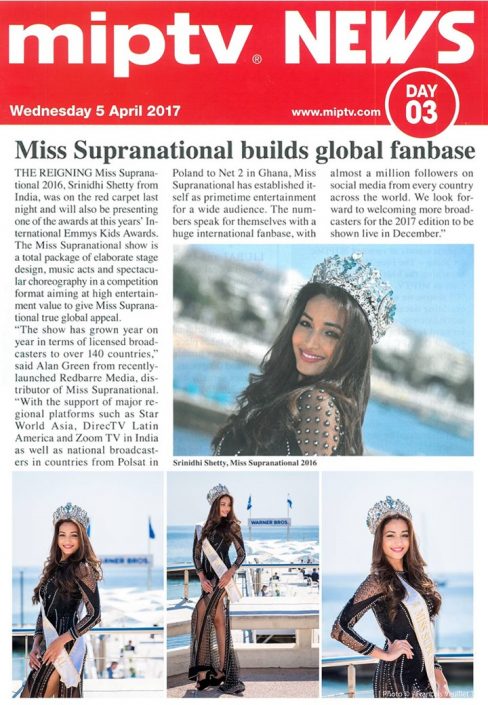